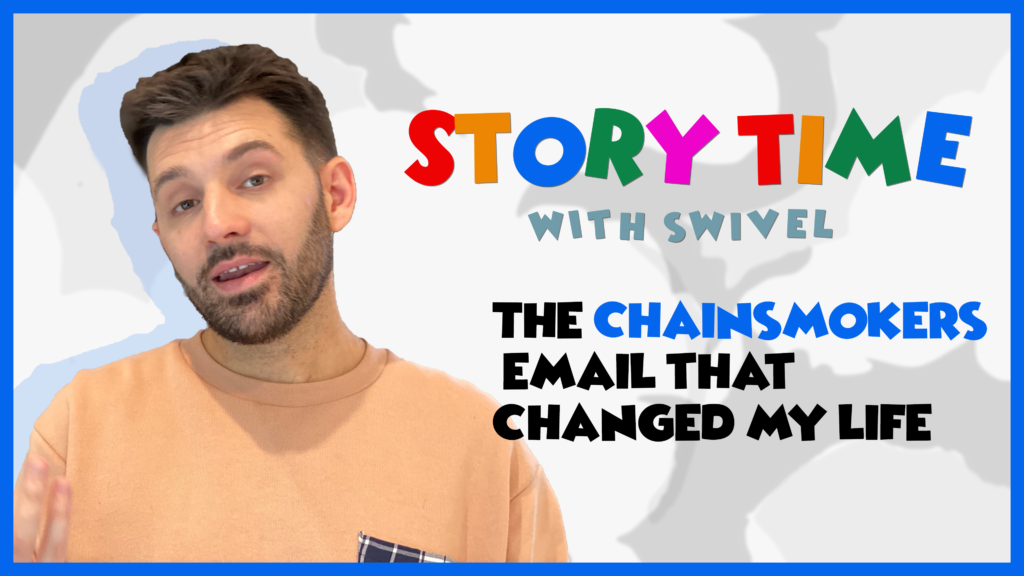 The Chainsmokers e-mail that changed my life

About six months before I left New York City for my move to Los Angeles at the end of 2014 I got an email from the Chainsmokers manager Adam, he had reached out to connect me with the Chainsmokers. I did not know Adam at the time but he was referred to me by Imran Majid who is now the co-CEO of Island Records. During this era I use to go out every weekend in New York City and while I personally did not know the Chainsmokers, a lot of the clubs I would go to they were actually DJ’ing at.

We setup a meeting in the A Room at Jungle City Studios in New York City and the Chainsmokers came up and we met and I guess at the time they were looking for some help on the mixing side of things, vocal production and just all the finishing touches for their records. Alex and Drew were super nice and we all got along right away, they played me the music and I had asked them to leave me folder of the music so I could really live with the records and take a deep dive on the overall project, this batch of music ultimately became the Bouquet EP.

A little over a week later I was flying to L.A. for the Grammy’s and the flight from New York to Los Angeles is about 6 hours long and I listened through all the music they left me and I thought to myself wow the music is really good. There were six or seven songs and I just started taking notes on my laptop during the flight on every single thing that I liked and disliked about each song and by the time I was done I had a three page document that had all my ideas and thoughts that could possibly improve the music and I sent it to the Chainsmokers.

Writing a long winded document type e-mail was not about getting a quick gig, mix or to make a couple of bucks, I genuinely liked the guys as people and I liked the music and I thought let me at least try to pay it forward and provide some advice and value at no cost to them. I didn’t hear from the Chainsmokers right away, about a month later I had got a call and they asked me to mix “good intentions” which was one of the songs from the group of music they had originally left with me.

I mix a bit differently than other mixers because I’m also a producer, I typically have feedback and comments regarding drum sounds and I might even go ahead and replace drum sounds and layer synths, sometimes I might even add background vocals. This process has become part of my workflow and at the end of the day my job is to make sure when a song leaves me it’s the version of the song that is going to come out, so it has to be as good as it can be possibly be, so I will typically do everything that I can to improve a song and then give the artist the option whether or not they want to use those additional parts or not. In the case of “good intentions” we made a couple of the changes I suggested and the record came out as part of the Bouquet EP.

After the Bouquet EP dropped I did not hear from the Chainsmokers. I had made the move to Los Angeles and was getting settled but one day I had heard the Chainsmokers decided to make the move to Los Angeles as well. It just so happened that they reached out to me shortly after I heard this news. The Chainsmokers were starting their next EP and they wanted me actively involved and the next song they gave me to mix was “Don’t Let Me Down” which went on to win a Grammy. From there I worked on “Closer” and we finished the entire Collage EP together as well as the Memories… Do Not Open Album which I sort of co-produced, vocal produced and mixed the entire project.

Bottom line it’s really important to pay things forward and take the time and energy and put it all into something that does not have an immediate monetary upside. Paying it forward and showing your value is so important and this is no different than when I was interning when I started my career as an unpaid intern working 120 hours a week for a year. Working as an intern was the best thing I could have done for my career because it showed me how badly I wanted it and I was able to learn so much. The lesson here is to go above and beyond everyone else who is probably in line for that same job, and in the long run I think you will appreciate the results from that little bit of extra work that you do upfront without asking or expecting anything in return. That e-mail I wrote to the Chainsmokers changed my life and catapulted my career to a whole new level and we have all gone on to do some amazing things!